Behind the Scenes at Salvatore Piccolo’s Naples Workshop

Exit Naples’ busy Napoli Centrale rail terminus, and make for a side street heading towards the rear of the station. Ring the bell at the nondescript entrance to one of numerous anonymous two-story industrial buildings which line the street, and climb the bare concrete stairs. Knocking on the door, it opens not to reveal the dusty buzzsaw-cut air of light industry, but instead an unexpectedly refined showroom, into which you are now welcomed by a friendly and unpretentious man wearing distinctive “soft” Italian tailoring.

This is the front-of-shop reception of Neapolitan bespoke shirtmaker Salvatore Piccolo: elegant wallpaper, wood fittings, bolts of some of the finest Italian shirting fabric ever made. Here Piccolo meets those bespoke clients who seek him out on his home territory.

But these days Piccolo also spends a considerable amount of time traveling abroad to measure an increasing number of exclusive clients unwilling, or unable, to venture as far as Southern Italy. Indeed, Piccolo’s star is on the rise, and if you consider yourself something of a connoisseur when it comes to Italian tailoring, but don’t already own any Salvatore Piccolo shirts, you likely soon will.

There are a lot of perfectly good dress shirts being made in this part of the world though. Some specifically to order, others on a fully industrial scale. However, few of these producers have attracted the degree of international attention that is currently directed towards Salvatore Piccolo.

Without a doubt, Piccolo makes beautiful shirts. But what makes his shirts more desirable than those being churned out by the countless other small and medium sized shirtmakers that populate the brutal industrial hinterlands of Napoli and the satellite towns of Campania? 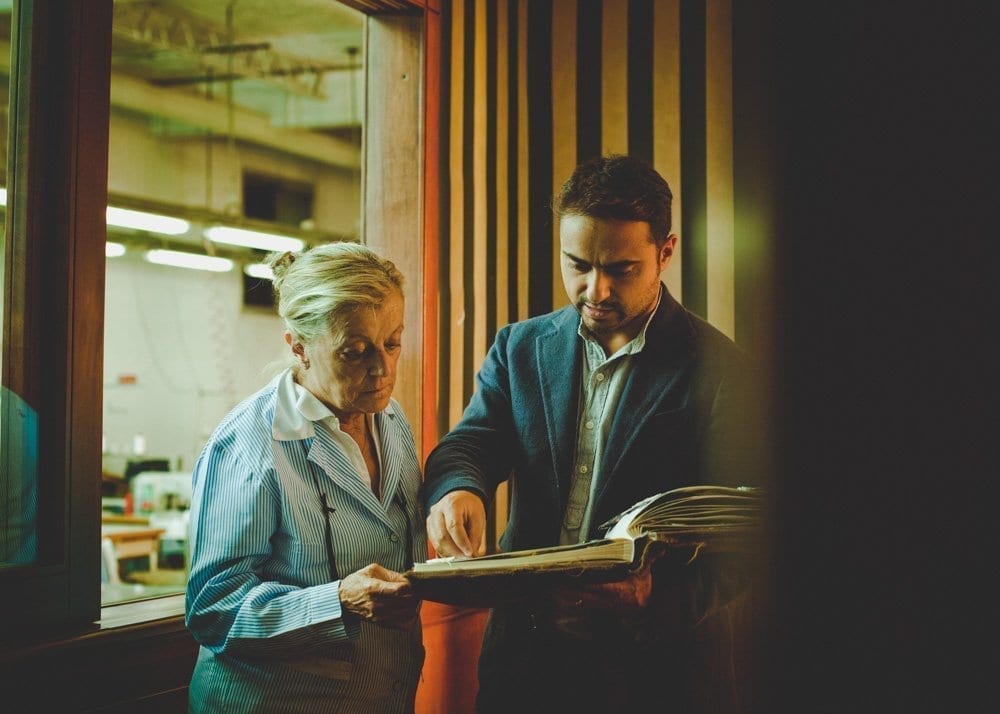 Superficially, a shirt is a shirt: a garment that has been refined over centuries to the point that there’s really not all that much that can be improved about its design. Ultimately, then, what makes one shirt better than another is not major innovation, but rather comes down to attention to the smaller details. And fit.

Piccolo excels at both.

For example, the back of Piccolo’s shirts often feature standard darts, but if you look carefully at the yoke you’ll also notice some almost imperceptible gathering up of the fabric into the subtlest of puckered pleating. This permits a little extra give in this important area of the shirt, without allowing it to billow out at the back like a sail.

Piccolo is also known for the mini-darts he inserts on the inside of a shirt’s elbow, to give the sleeve a natural shape that is closer to the half-cocked position that our arms actually stay in for much of our lives. Although Piccolo is not the only shirt maker to employ these techniques, the combined effect is one of high quality.

Of course, from this list we’re missing possibly the single most important element contributing to a good quality shirt: the cloth. And Piccolo chooses his shirting fabrics carefully. He’s even known to work with mills in developing certain fabrics specifically for his own use.

But there’s still one other important component we haven’t touched upon here.

At the rear of Piccolo’s showroom a door leads out to his private office in the back. To anyone who ventures beyond this point, it will quickly become apparent that the front showroom in which you were initially greeted is in fact not dissimilar to a film set: tasteful furnishings over 2x4s and flimsy partition walls. A theatrical stage erected to provide the kind of classy welcome expected by a certain level of clientele, while simultaneously hiding the rather less glamorous view behind the scenes.

To be sure, the smart decor of the showroom is one reality of modern day bespoke tailoring: an industry that in large part relies upon the maintenance of a carefully constructed image of refined grace and tradition. This image is further perpetuated by “classic” menswear blogs with titles evoking the idea of a timeless and exclusive kind of elegance: “gentlemen,” “permanence,” “rakes”. The mythology then feeds back to the producers themselves, who realize that in order to push their services and products to the lucrative N. American and E. Asian markets, they need to position themselves as “heritage” brands – for example by producing absurd videos of aristocrats in palatial villas being measured up by handsome men in tailored vests.

Of course, the other reality is that, no matter the quality of the clothes, or in which surroundings they may ultimately be worn, they are generally made in environments that are more urban than urbane. Salvatore Piccolo’s shirts and ties are no exception, and beyond his office area lies a regular no-frills workshop filled with the usual array of clothes racks, cutting tables, steamers, presses and sewing machines. All of course “manned” by ladies, rather than “gentlemen.” And not a single woolen vest in sight.

Piccolo’s fancy showroom backdrop, built up in the corner of a regular factory space, is a facade created to meet the expectations of his clients. But visit the HQ of any well-known luxury clothing brand in the world and you’ll also be received in a building, or a portion of a building, that was designed specifically for that purpose: the apex of contemporary interior design, exclusive artworks hanging on the walls, with warm and subdued lighting to match. Go instead to work for that brand, and you”re more likely to spend your days sitting under neon strip-lights in a bare and cavernous shop like this one.

Assuming the working conditions are okay, I see absolutely nothing wrong with this: it’s a practical environment designed for getting a particular job done. And you wouldn’t expect to find a pattern cutter working in a chic-designer setting any more than you would to find a mechanic under the hood of a car in the middle of a hotel spa.

Well, I mention it not as a criticism, but more as a reminder. With his almost makeshift showroom installation, Piccolo has a set-up that draws particular attention to the dual realities of this industry. Despite the image that is often projected, the making of clothes – even “luxury” clothes – is a form of manual labor. One that usually involves many individuals.

Yet between marketing campaigns featuring beautiful youths who never did a hard day’s work in their lives, and all the hype about genius sartorial vision, it can be easy to forget that somebody somewhere sat down at a table with scissors and a sewing machine and put that thing together piece by piece. 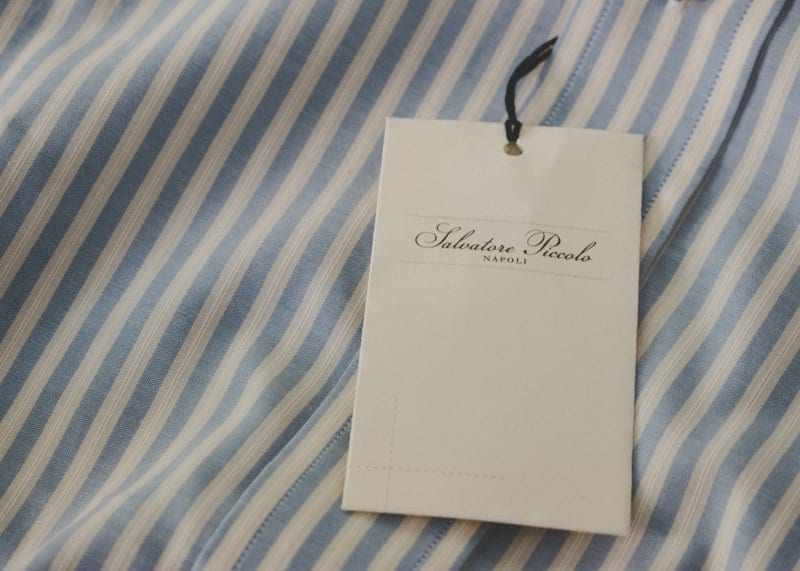 To make good clothing requires great skill. When we buy clothes, they often have a person’s name on them, in the form of a brand label or logo. Just how much of a debt the quality of any particular garment owes to the person whose name adorns that label is anybody’s guess. But whatever the case, you can be certain that a whole bunch of other skilled and hard working people also contributed to the making of that item, yet likely received very little glory (and not necessarily all that much pay either).

Salvatore learned the craft of shirtmaking from his mother, who herself was a shirtmaker from a very early age. In fact, although the brand bears Piccolo junior’s name, if you scan the internet, you’ll find several photos of Salvatore at work alongside his “mamma”, reflecting the key role the Piccolo matriarch plays in the business to this day. When we visited, most of the worker’s had left for the day, but Salvatore called his mom over for the photos.

Although by no means unique, especially in Italy, Salvatore Piccolo is somewhat unusual in that he offers both bespoke and ready to wear garments. With business divided pretty much equally between the two. Depending on how you look at things, then, he’s either a very large-scale tailor, or a small scale RTW brand. Either way, while Salvatore may spend plenty of time out the front working the public image, his mom is in the back cutting and sewing along with the rest of the team. H&M it is not.

Part of what you’re paying for when you buy a Salvatore Piccolo shirt is simply the fact that the brand is a relatively small-scale operation, where the division between marketing hype and shop floor reality is minimal: indeed, no wider than a sheetrock dividing wall. This can only translate into better quality products. 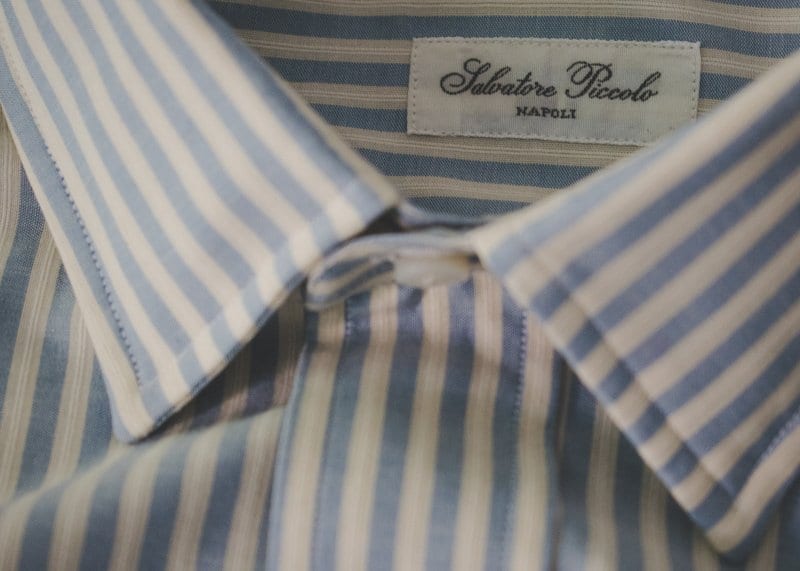 Oddly, though, there’s no “Made in…” label inside my RTW Salvatore Piccolo shirt. Yet, wherever it was made, the quality of work is undoubtedly good. For example, the side and arm seams don’t line up, indicating that the sleeves were inserted last: a sign of high craftsmanship that is not often seen on RTW items. For this reason, I’m going to be generous and assume that my shirt was made in the same central Naples workshop that we visited, and where his MTM garments are made.

The claim is that Piccolo’s production values are the same across both MTM and RTW. This means that, if you’re lucky enough to have a fairly “standard” body shape, you can effectively get the same quality as his MTM shirts for a cheaper price by going directly for RTW.

Readers should be aware that there is another Neapolitan shirt maker by the name of Camiceria Piccolo, the current owner of which is also called Salvatore Piccolo. Piccolo is a common Italian surname and there is no connection between these two brands other than a shared profession in the same location. At the time of writing, Salvatore Piccolo’s website salvatorepiccolo.com was not working – whereas the website of the second, unrelated, Camiceria Piccolo was.